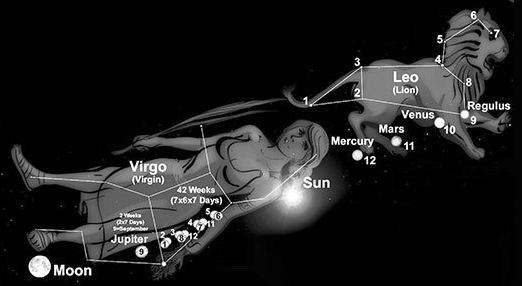 This does not attempt to predict a date. It renders a biblical interpretation of an event so you can watch out for this sign, stay awake and pray – just in case.

The Woman and The Dragon Prophecy

September 23rd is The Day of Trumpets – a High-Holy Day on God’s calendar (Lev. 23:23-25) – and a double Sabbath because it falls on Saturday. This may be when the Prophecy of Revelation 12 comes true, which states: And there appeared a great wonder in heaven; a woman clothed with the sun, and the moon under her feet, and upon her head a crown of twelve stars: And she being with child cried, travailing in birth, and pained to be delivered. And there appeared another wonder in heaven; and behold a great red dragon, having seven heads and ten horns, and seven crowns upon his heads. And his tail drew the third part of the stars of heaven, and did cast them to the earth: and the dragon stood before the woman which was ready to be delivered, for to devour her child as soon as it was born. And she brought forth a man child, who was to rule all nations with a rod of iron: and her child was caught up unto God, and to his throne.

If what astronomers say is true, then this can be the fulfillment of Revelation 12. But what does it mean? Some believe it is the Rapture or Jacob’s Trouble, which are not the case. The Rapture happens after the 7-Year Tribulation and Jacob’s Trouble occurs at the middle of the Tribulation. The heavenly sign is two Prophecies. The first one about the virgin birth was fulfilled on September 23rd, 3BC – The Feast of Trumpets, Christ’s birthday – when the lights [the Sun, the Moon, Mercury (Gabriel the messenger), Venus and Jupiter (King light) which overlapped Regulus (King star at the heart of Leo the Lion)] formed a straight line through Virgo and Leo. If we reject the Rapture of the Church before the Tribulation and the devil has already been cast down to earth heresies, the second Prophecy of war breaking out in heaven, and the devil cast down and pursues the Woman (Rev. 12:6-18) may be fulfilled on September 23rd when similar lights [the Sun, the Moon, Mercury, Venus and Mars (Michael the warrior)] form a straight line through Virgo and Leo.

When war breaks out in heaven at the Great Rebellion, the devil and 1/3 of heaven’s angels will be cast down to earth and the Antichrist will be revealed (2 Thes. 2:3-4). The devil causes and starts The Tribulation, when he and his angels are cast down to earth, by killing everyone who does not worship him, the statue of the 7-headed Beast, nor receive a tattoo mark of the name of Satan which symbolizes ownership, allegiance and an enemy of God. Then, after committing blasphemy, followers of Satan will receive an RFID microchip to buy and sell.

Why This May Be True

Conversely, I hope that astronomers are off by years with this prediction or that they are making it up like the Planets, the Galaxies and Space. I believe in the heavens under the firmament but they are just lights in the sky (Gen. 1:14-18). In fact, when the devil and his angels are cast down to earth, many will say that the fallen angels are aliens who are invading us and we need to unite into a One World Government (NWO). And the devil is an ancient god that must be worship who has come to rein in the Golden Age – the reason for convincing you that Planets, Galaxies and Space exist. See Endless Lies.

…preaching the return of King Jesus and His Kingdom on the streets of NYC from a Hebrew perspective. Several Churches call me a false prophet. How charming is that? The Church is institutionalized religion controlled, at the highest level, by the government. She commits spiritual adultery by worshiping Ishtar on Easter Sunday and Mythras on his birthday of December 25th saying this is Christ’s birthday, supporting abortion, marrying gays, and breaking the Sabbath instead of honoring The Feasts of the Lord which are shadows of good things to come. She is always “politically correct.” If your church does not teach on the book of Revelation, The Tribulation, the prophetic Sabbath Day and the Feasts of the Lord, believes in Pre-Trib, the devil has already been cast down to earth, endorses candidates (violates Non-Profit tax exempt status) or is lukewarm, then you need to wake up. The LORD says, “…to watch and pray” not “…to watch and doubt,” or “…to not watch and criticize.” You should be praying and giving thanks to Yehovah in the name of Yeshuah for not judging our nation and us at this time. When you are looking for signs, there may be some false alarms but you will not be surprised. Even if The Prophecy of The Tribulation does not happen at this time, it is still a sign that we should be watching for.

Pray for salvation today with me saying:

Holy Father in heaven, thank You for hearing me. I am an unworthy sinner and I now turn from my evil, selfish ways. I believe in my heart Jesus died for my sins and You raised Him up on the third day. I confess with my mouth that Jesus is the King of my life. I declare it is true.

And for the Prophecy:

Father God, King of the universe, we pray to You in Jesus’ name that the Prophecy will not come true this year so that more people can be saved for the glory of King Jesus. We thank You for granting us this request, amen.

You’re saved. Now what? Read the gospel of John, practice Christianity and get baptized!
For those who are already saved, keep watching and keep praying. And if this tract has been helpful to you, please donate.

Here is a video for you to see, which may be accurate. I say May Be because I don’t want it to come true.